Charles E. Cobb Jr., former Student Nonviolent Coordinating Committee (SNCC) field secretary, recently wrote a very good article “Black people had the power to fix the problems in Ferguson before the Brown shooting. They failed (http://wapo.st/1DtwxSV).” While Mr. Cobb makes some excellent points regarding the Civil Rights Movement as it relates to the events that occurred, most recently, in Ferguson, MO, he falls short when placing the blame at the feet of the citizens of Ferguson. Mr. Cobb reveals his short-sightedness when on the one hand he describes a number of instances where young people in the work of social justice should be celebrated, and that the key is organizing, but then goes on to say “[a]s Julian Bond once challenged a group of young people, “Pass the torch? Snatch it like we did.” 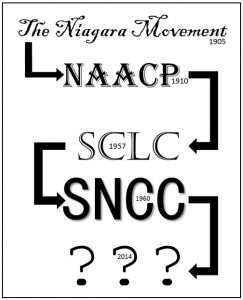 It is, in fact, this last statement that spurred this article, and is perhaps the primary issue at the core of why so many young people feel a lack of attachment to the “movement.” Do not get me wrong, I hold the highest respect for the organizers of the Civil Rights and Black Power movements, and those of SNCC in particular. In my experience, SNCC organizers have always displayed a unique ability to analyze situations at a deeper level than most, an eye to the root cause as opposed to merely the symptoms of the issue at hand. However, this idea that today’s youth need to make their own way, or “snatch it like we did” as Julian Bond put it, is a bit disingenuous.

For the sake of context, I think we need to recognize a timeline, if you will, of “movements”. From the beginning of the United States of America, there has been what can be called a Black Freedom movement that encompasses the following: the Abolition movement, which upon the abolishment of slavery,  gave way to several overlapping movements, such as anti-lynching, voting rights, human rights, Black empowerment, Back to Africa, and so on. All of these happened within the context of Blacks being recognized and afforded the rights of U.S. (and world) citizens.

During the 1910’s the NAACP began to emerge as the primary organization for Black Folks’ rights. It is important to note, that neither their birth nor growth occurred in the absence of people who had been in the work from prior decades; most notably the Niagara Movement. When, during the mid-1950’s, the organization was outlawed in Alabama and all but outlawed across the South, Southern ministers, trained by the NAACP, along with NAACP field organizer Ella Baker, started the SCLC. This act, right here can quite effectively be argued as the start of the Civil Rights Movement – the latest (at the time) part of the overall Freedom Movement – it was this act that freed up Southern Blacks to organize actions against the local White Power Structures in the form of boycotts, sit-ins, and such.

While the boycotts and sit-ins raised the issue of terrorism against Black Americans to the national stage, others began to look to the vote as a means for Blacks to effect power over their lives in their communities. It was in this environment, that Ella Baker worked with Bob Moses and others to help form and advise SNCC. I’ll stop here as this is the source of Mr. Cobb’s training and experience, as well as that of Mr. Julian Bond, who Mr. Cobb quotes in his directive to young people today.

For Mr. Bond, or anyone else, from SNCC or any of the other organizations that have fought for Black Freedom in these United States to imply that they “snatched” the torch or anything else is misleading in its directive and negligent in its implication that the youth of today do it themselves cuz we that’s what we did.

No, the Black people of Ferguson did not fail as much as they were failed. They were failed by a community of Black leaders and citizenry who chose to leave the Black community to fend for itself as they took University positions and political offices, strove to be the “first Black,” and chase the myriad manifestations of “the white man’s…” As a result, communities across the country, in the absence of trained organizers, thought leaders, etc. were left with television, radio, and other forms of entertainment to guide their social thinking processes. There were far too few voices consistently reminding us of the need to support local businesses, exercise power via the vote, and to continue to value education as a viable tool for personal and community development; as a result, today’s young organizers are the first, since the Freedom Movement began at the dawning of the United States, to have to figure it out for themselves; and that is not only a failure but a tragedy.